“In spite of his sadism, he was, at his core, rather over-indulged and a pussy.”

I f you’ve seen the HBO series Game of Thrones, the name Joffrey Baratheon will almost certainly jump-start a montage of cruelty and usurpations of power. The legitimacy of the teenaged king’s claim to the throne in and of itself is a subject for another day, but speaking strictly about the job he did as a ruler, he never really offered much other than a highlight reel of torture that would’ve made him a division one athlete at the university of his choosing– were sadism somehow a collegiate sport.

What sticks out most acutely from his catalogue of disregard for human life is a scene in which he coerces one call girl into mercilessly beating another. What begins as a drizzle of playful S&M exploration quickly crescendos to a raining down of blows on a prone prostitute, compliments of a weapon that most nearly resembles the medieval version of Captain Caveman’s club.

What’s interesting about this scene is that part of you wants to believe that there’s gotta be something–or a few somethings– that aren’t all the way there with someone that’s this brutish within the confines of his own bedroom. Yeah, it’s one thing to behead a man in front of his children or cut out a singer’s tongue in reprisal for a not-so-favorable song about your parents, but these things are all in a day’s work for a despot. The bedroom is a different case entirely–purportedly a place for tenderness–where affection and intimacy are to be nurtured, rather than extinguished by over-aggression. Surely, there would need to be some other factor, or a combination thereof, leading someone to be that aggressive toward their partner–prostitute or not.

From the mid-70s to 1980, Suzanne Ageton, a health scientist, conducted a study in which she assessed the relationship between attitudes and aggression over time. She used roughly 1,700 youths aged 11-17 from the National Youth Survey of self-reported delinquency to isolate a sample of males who reported incidents of sexual aggression and analyzed their responses to particular questions pertaining to sexual attitudes and behavior.

In analyzing the data, Ageton found that though the profile of an aggressor varied drastically with respect to skin color, family income, etc., a vast majority of the offenders shared the common characteristic of involvement in a delinquent peer group, in addition to consistent participation in delinquent activities. In fact, involvement in a delinquent peer group accounted for 76% of the variance in the self-reported sexual aggression that would occur later among those studied.

In one particular analysis, previous attitudes, behaviors and reported group involvement were tested for their predictive ability regarding future “sexually assaultive behavior, attitudes toward rape, and acceptance of interpersonal violence toward women.” The presence of these attitudes, Ageton discovered, emerged as a statistically significant factor in projecting which males would engage in sexually aggressive behavior a mere two years later.

In other words, a given adolescent male that possesses a certain penchant for doing hoodrat stuff with his friends stands a greater chance of developing or fortifying already-held pro-aggressive attitudes which, in turn, often manifest themselves in the form of rape, verbal abuse or, in the case of King Joffrey, coercion.

Joffrey was never a member of a delinquent group prior to inheriting the throne, though. In fact, in spite of his sadism, he was, at his core, rather over-indulged and a pussy–neither of which are traits that lend themselves to sexual aggression, per Ageton’s study.

A few years later, Neil Malamuth and Ed Donnerstein, a pair or psych professors at the University of Connecticut, conducted a study with male undergraduates in which the subjects were:

It should come as a surprise to no one that those who were previously aggravated by female participants tended to give out electric shocks like Halloween candy, while the subjects who received neutral treatment were much less vengeful when the opportunity presented itself. The more eye-opening finding from this study, however, was the impact that film content had on a subject’s attitude toward force and aggression as well as their resulting likelihood of administering a shock to the female participants.

“Stanley Kowalski, Bluto the Terrible, or every dark-skinned man ever cast in a Tyler Perry movie.”

A third insight into malicious sexual aggression is the disposition of the aggressor along with factors of arousal and a theory known as excitation transfer.

A pair of psychologists had 175 nineteen-year-old college sophomores anonymously complete a questionnaire known as the Hypermasculinity Inventory (measuring agreement or disagreement with calloused sex attitudes toward women, violence as inherently manly, and danger as exciting), as well as an Aggressive Sexual Behavior Inventory. This was done–one would assume–to determine whether the subjects were more Stanley Kowalski, Bluto the Terrible, or every dark-skinned man ever cast in a Tyler Perry movie.

The study did a lot to confirm prior hypotheses about the macho personality, particularly noting that calloused sex attitudes toward women were correlated with a history of sexual aggression. Later, 125 men returned for a second session where they were randomly assigned to four groups in which they were made to envision a rape involving two different levels of applied force or two different levels of victim resistance.

So, here you have someone whose personality is notably hypermasculine: They find violence and danger unusually appealing, take excessive pride in their collection of sleeveless shirts, and in all likelihood take a few moments out of each day to pay homage to the framed Village People print they’ve got strung up in their room. Add to this equation a partner that is every bit the woman of the aggressor’s dreams–in the worst possible sense of the word– resembling the kind of victim they’ve always wanted to take action against. All that’s missing, assuming the first two factors aren’t enough, is a bit of preconditioning to induce what’s known as “excitation transfer.”

Any time something evokes a particularly strong emotion in us that we’re unable to resolve, the leftover excitement from that first occasion is often transferred to the next instance in which we find ourselves feeling any particularly strong emotion, regardless of whether the first emotion and the second are the same. This is why a comeback win in sports feels so much better than a blowout. You’re set up by the negative emotion associated with anticipating defeat and then suddenly experience the rush of euphoria attached to winning, which itself is enhanced by the lingering excitement of the negative emotion.

If an aggressor comes into a situation with enough of a lingering emotion, positive or negative, and experiences a surge of another emotion as a result of the sexual encounter, the second emotion is amplified by the remnants of the first. 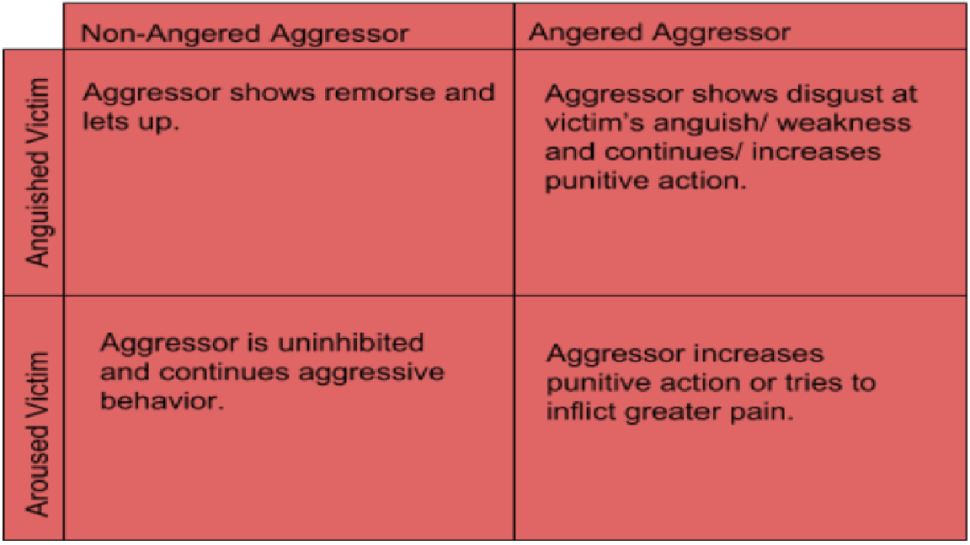 No one can say for sure whether he had been conditioned to anger or had some lingering emotion pent-up prior to entering the bedroom, though if this were the case, it would certainly explain his ratcheting up the pain level in response to the initial pleasure the prostitute took in being whipped, as well as his subsequent lack of empathy once she expressed anguish.

Devoid of an external catalyst like the ones we’ve discussed, explaining the Protector of the Realm’s bedroom barbarism seems much more easily achieved with a nature rather than nurture-centric approach. I don’t know what you want me to tell you–for a select few, the quotient of evil is just higher. For any Voltaire fans in the house though, there’s an apparent silver lining for the prostitute that was harmed in the making of this piece: “A modest woman may be ravaged once, but her virtue is strengthened by it.” #prayfordaisy